Whether at work or evacuated, homeowners are often not home when a wildfire threatens. In extreme fire conditions, firefighters will not be able to defend every threatened home and so, the survivability of your home depends on you.

It is a common misconception that wildland/urban interface homes ignite because a giant wall of flames consumed everything in its path. Several recent case studies have found that wildfire ember storms are the greatest danger to homes and businesses in wildfire-prone areas. 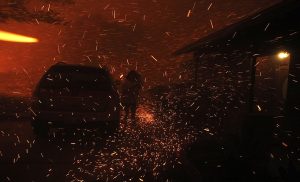 Sometimes called red snow, flaming brands and embers can travel as far as 5 miles ahead of the active front of a wildfire and ignite homes well ahead of the flaming front. When this red snow showers down upon your property it lands in the many nooks and crannies that every home has; often the same places where actual snow accumulates each winter.

Once they land, they can quickly ignite the combustible surfaces they accumulate on or next to, or smolder for long periods of time and start a blaze long after the flaming from of the fire has passed.

Because of the proximity and flammability of structures, once one home or structure ignites, additional ignitions from convection and radiation increase as well. What was a wildland fire has now become an urban conflagration.

Scientists at the Insurance Institute for Business and Home Safety have found that the ignitability of WUI homes hinge on the design and exterior building materials of the buildings and their proximity to burning objects ignited by firebrands.

Whether ignition from radiate heat or embers blowing in on the wind, there are certain design and building techniques that can greatly decrease the ignitability of your structures and the areas immediately surrounding them.