Though a natural part of the ecosystems of the Inland West, wildfire is one of the most feared, most fought, and most controversial components of our physical environment. Periodic wildfires are an important natural component of forest and rangeland ecosystems and help species that are best suited to a particular place, maintain a competitive advantage over less suited species.

The plant and animal community that occupies your land today is one that is in constant transition, with each species responding to changes in the local environment in their own particular time and manner. Fire is one of the few disturbances that regularly kills large numbers of mature individuals, which plays an important role in the structure of plant and animal communities. 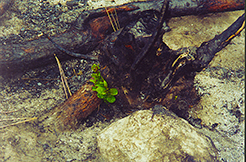 The plant and animal community that occupies your land today is one that is in constant transition.

More than 50 percent of Idaho is forested

Over time, forests grow thick with living and dead vegetation. Some wildfires burn all vegetation in a forest, but many leave behind a mosaic of live and dead plants.

After a wildfire, new vegetation has room to grow. New trees and tender grasses sprout in the sunlight, attracting wildlife such as elk, deer and antelope. Some trees rely on wildfire to repopulate the forest. Several species of native conifers are serotinous—the seeds remain in resin-covered cones, often for many years, until they are exposed to intense heat. The heat melts the covering, allowing the cones to open. The seeds then fall to the ground just when conditions for germination are optimal—in the ashes immediately after a fire.

Wildfire plays an important role in the health of Idaho's rangelands.

About 45 percent of Idaho is covered in rangeland

As in forests, wildfire plays an important role in the health of rangelands. Without regular wildfires, juniper trees begin to grow, crowding out sagebrush and grasses and reducing habitat for sagebrush-dependent wildlife such as sage grouse.

Wildfire regimes are characterized by frequency, season and intensity.

Wildfires vary in terms of how often they occurs (frequency), when they occur (season), and how fiercely they burn (intensity). Combinations of these elements define an area’s fire regime. Two general fire regimes are recognized. 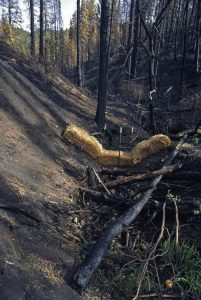 Hay bales being used to control erosion after a stand-replacing wildfire.

Though natural, not all wildfires are good for Idaho ecosystems. Because natural fire regimes that are unaffected by suppression are extremely rare today, today’s wildfires are very different from those in the past.

In recent years, Idaho has experienced several large, long-lasting wildfires, which burned thousands of acres at a time. Most of these stand-replacing fires occurred in areas that historically had a stand-maintenance fire regime. Unwanted results from this type of fire activity include: 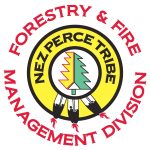 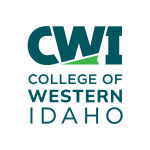