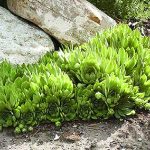 TWIN FALLS • As Brett Van Paepeghem drives around neighborhoods, he notices most people aren’t as safe as they might believe.

Van Paepeghem, who is the Boise-based southern Idaho project manager at Idaho Firewise, says homeowners often don’t put enough space between the shrubs and trees surrounding their homes. This can increase the risk of loss from a wildfire.

“We don’t want landscape that is continuous to the house like a fuse,” Van Paepeghem said.

Thursday, Van Paepeghem was in Twin Falls for the opening of the College of Southern Idaho Breckenridge Endowment Farm Firewise Demonstration Garden across from the CSI campus. It is the sixth garden he’s helped open in southern Idaho.

The firewise garden is a joint project between the Mid-Snake Resource Conservation and Development, the CSI Agriculture Department and Horticulture Program and the Twin Falls District Bureau of Land Management. It will be open to the public year-round in order to better educate the public about fire protection.

The term “firewise” describes the goal of teaching residents about how planting low-growing, fire resistant shrubs, groundcovers and perennials around their homes can reduce the risk of home destruction, says the National Fire Protection Association. Firewise Idaho is the result of the Idaho State Fire Plan Working Group’s 2007 National Fire Plan survey that was distributed to all 44 counties. The survey indicated that there was a need for a statewide fire education and prevention programs.

The firewise garden at CSI demonstrates various landscape plants that are fire resistant such as ‘Powis Castle’ wormwood and succulent plants like hens and chicks. It also offers kiosks throughout the garden with maintenance tips that can help protect homes from wildfires. The firewise garden will be maintained by CSI horticultural students and lead by horticulture instructor Chance Munns, who designed the garden layout.

Instead of telling homeowners about the fire resistant shrubs and plants they should be planting, Lorraine Simonson said, she will now be able to show them. Simonson is the fire educator for the Mid-Snake RC&D and works with five firewise communities in eight counties. Firewise communities are those that work together to ensure their homes are defendable against wildfire and meet the requirements of Firewise Community USA.